News
The Bitbuy Brief: Bitcoin All Time-Highs This Week 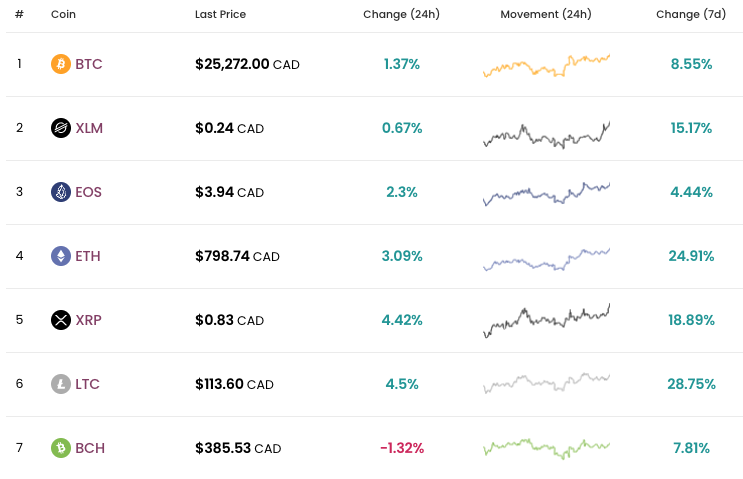 Analysis: After weeks of flirting, Bitcoin briefly touched all-time highs on December 1st at around 9am! On Bitbuy, the price topped out at $25,624 and USD exchanges saw it as high as $19,888. The market has bounced back overall significantly from a rapid drop last week, and it seems only a matter of time before Bitcoin finally crosses the $20KUSD mark.

We’re Back At All-Time High Prices

Bitcoin Finally Made New All-Time Price Highs, Surpassing The Previous Record From December 2017 – While The Price Action Is An Important And Comforting Milestone For The Crypto Ecosystem, We Point Out That Several Fundamental Metrics Of Bitcoin/Crypto Usage/Adoption Made New All-Time Highs Ahead Of The Price Move

The number of BTC addresses with a non-zero balance surpassed highs made in late 2018 (22.2M addresses) in early-2020. The metric continued to push higher, now sitting at 32.6M. This is clear sign that adoption has been growing steadily in between 2017 and now.

Mining statistics were also leading indicators of the price move. BTC has been posting new all-time-high difficulty levels since mid-September. Hash rate, which measures the total computing power facilitating transactions on the network, experienced an all-time high in mid-October.
In fact, since highs in December 2017, BTC hash rate has increased 3.3x. Finally, the BTC Lightning Network, considered to be a leading layer-2 scaling solution for the network, has been seeing a steady inflow of the coin, reaching a record 1.12k deposited BTC on October 1.

How Did We Get Here?

Takeaway: The general sentiment in the space is that price is leading some future use case for crypto/BTC. While multi-billion dollar valuations suggest that, that is true, we find it interesting that some very basic fundamental usage indicators have been active behind the scenes on this move to all-time highs.
While searches and media interest are almost exclusively correlated to large price moves in the coin, network and development statistics were steadily recovering and then breaking records throughout the recovery post-2017/18. Ultimately, while perception is that crypto prices are largely divorced from fundamental metrics, in this case, they were a good short/mid-term leading indicator of price.

Disclaimer: The opinions and analysis expressed in this newsletter are those of the writer, and not of Bitbuy. Nothing in this note should be considered investment advice. Cryptocurrency assets are highly volatile and can change in value significantly in a short period of time. Bitbuy is a registered FINTRAC money services business under the virtual asset service provider category.