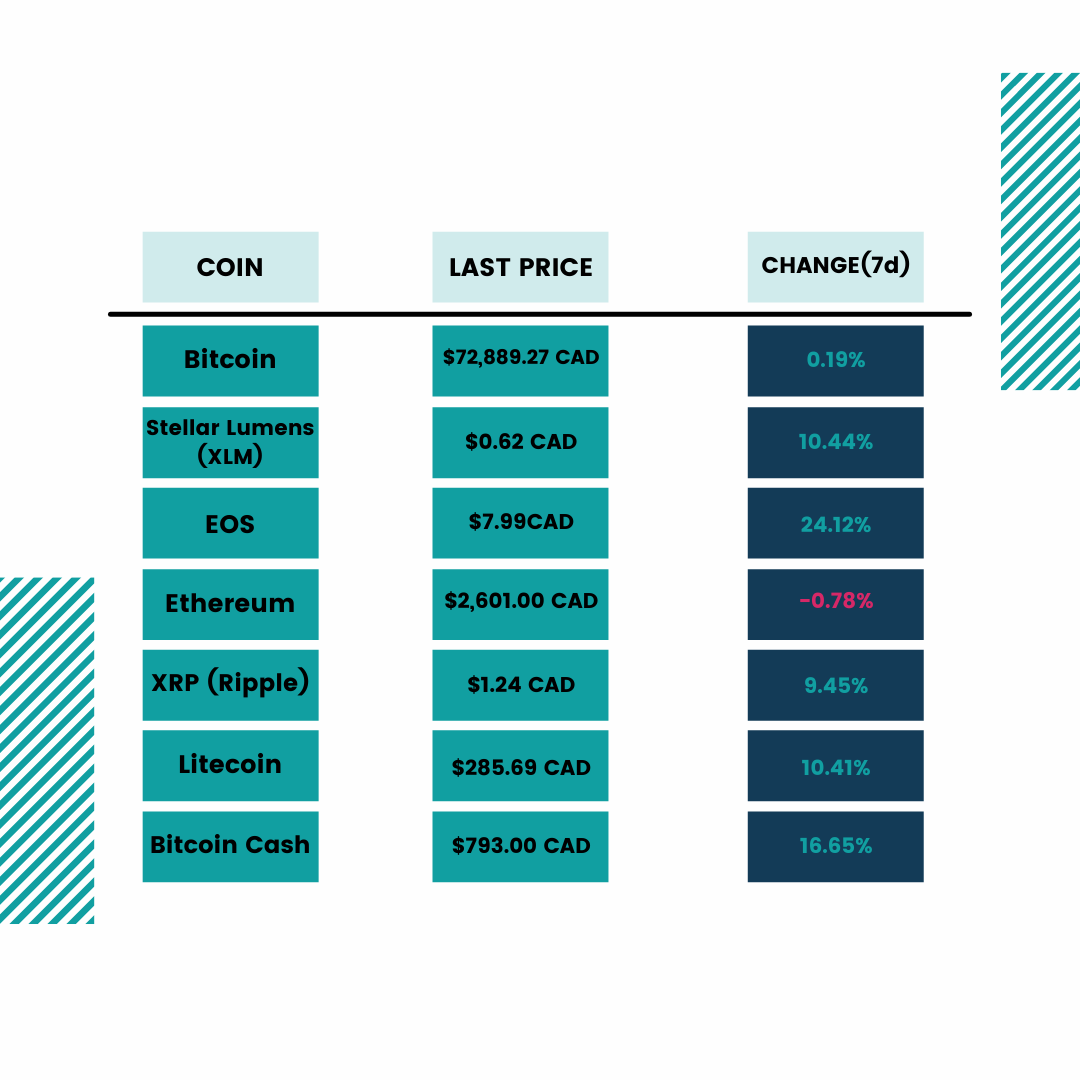 Weekly Market Analysis:  Is AltSzn finally upon us? XRP soared to new 2021 highs, touching as high as $1.37CAD while EOS gained 24% of the 7-day trading period. Bitcoin had a modest week compared to the other coins available on Bitbuy with less than 1% gain. Spot volumes continue to trend upwards compared to 30 day averages. Coming up: Microsoft & Bitcoin.

Two Weeks Ago Microsoft Launched Version 1 Of The ION Decentralized Identifier (DID), A Decentralized Digital ID System Using The BTC Blockchain . ION Represents The Most High-Profile Use Of The Bitcoin (BTC) Network For A Non-Financial Purpose

ION, which Microsoft began working on in 2019,  utilizes a ‘blockchain-agnostic Sidetree protocol on top of Bitcoin’ in order to support a digital ID system.

The Sidetree protocol, conceptually akin to the Lightning Network, allows ‘tens of thousands’ of ION off-chain operations to be communicated to the BTC blockchain.
The system is non-censorable – digital IDs cannot be removed from the system by third parties – and is temporary – digital IDs can be removed from the system at will by their owners.
Microsoft does not own ION, but rather, serves as a sponsor. ION also doesn’t introduce new tokens: ‘[BTC] is the only unit of value relevant in the operation of the on-chain aspects of the ION network.’
Data from ION is communicated and stored in the BTC blockchain via transactions, that unlike most activity on the network, doesn’t serve to transfer value, but instead ION information.
Unlike traditional IDs, ION IDs are controlled by the entity itself, which can be a firm or physical individual, similarly to how one maintains ownership of their BTC. Digital IDs are described by Microsoft as being essential to a ‘vibrant, interoperable decentralized identity and application ecosystem.’
Takeaway: The launch of ION, though admittedly early stage and without broad uptake, represents a notable moment for Bitcoin. Some of the coin’s proponents have argued that BTC, beyond its financial use, is the backbone of broad decentralized applications, which other networks, like Ethereum, are striving to create.
However, the majority of attention to date has focused on BTC’s store of value with focus on its blockchain centering on the enforcement of this characteristic.
A shift of attention towards the use of the network itself also highlights a new avenue for demand for the coin: paying for the processing of transactions associated with applications such as ION.
Furthermore, BTC’s detractors have questioned the sustainability of mining if users are incentivized to hold their coin for extended periods to realize price appreciation, thus limiting revenue from transaction processing for miners.
Non-financial use of the network creates a new opportunity for miner revenue. Broadly, the potential opportunities for BTC’s non-financial used to be largely unexplored and undiscussed as a potential selling point for the asset at this time.

Bloomberg’s April 2021 Crypto Outlook states that ‘[t]he technical outlook for [BTC] in 2021 remains strongly upward, if past patterns persist.’  According to the note, low volatility and the asset’s recent halving have ‘aligned favourably.’ – link – @BloombergCryptoOutlook
Fidelity, Square, Coinbase and investment firm Paradigm are forming an organization called the Crypto Council for Innovation with the aim of lobbying US policymakers to support the BTC and crypto sector.  The council will appoint a board with representatives from each of its four initial members and will form an executive team. – link – @WSJ
Messaging platform Signal has begun allowing a limited number of UK users to test a feature which includes the use of a cryptocurrency. The new feature, called Signal Payments, is described as allowing users to ‘send and receive privacy focused payments…’ and will initially feature the MobileCoin cryptocurrency. – link – @Wired
Collectibles company Topps, which plans to expand into NFTs, has announced that it will be taken public via a SPAC merger with Mudrick Investments, at a USD 1.3B valuation. The company told its investors in a presentation that ‘the company will reinvest in blockchain and NFTs as a growth accelerator.’ – link – @CoinDesk
The Sacramento Kings franchise have offered the option to all players and staff to be paid their salaries in BTC. The NBA franchise claims to be ‘one of the most crypto-forward teams in professional sports’, with their announcements of accepting BTC as payment in 2014 and a crypto-reward fan loyalty program in 2019. – link – @CoinDesk
Analytics Firm CB Insights reported that crypto startups raised USD 2.6B worth of VC funding in the first quarter of 2021. The capital was raised by a total of 129 startups, and has surpassed total funding of USD 2.3B raised in all of 2020. – link – @Bloomberg
JP Morgan released a note to clients stating that should BTC volatility continue to decrease, the bank predicts a long term price target of USD $130,000. The note suggests that lower volatility ‘could boost [BTC’s] adoption by institutions as a low-correlation asset’, and that the price target is ‘predicated on the idea that [BTC’s] volatility will converge with gold’s.’ – link – @BusinessInsider
DISCLAIMER: Nothing in this newsletter should be considered investment advice. The opinions and analysis in this are those of the writer and not of Bitbuy. Buying and selling cryptocurrencies is not without risk.