News
The Bitbuy Brief: Tesla Bought 1.5B in Bitcoin! 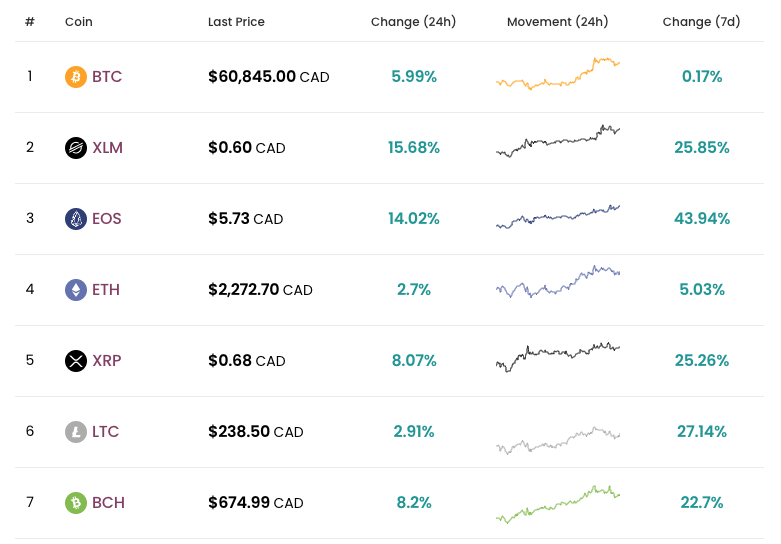 Analysis: Bitcoin continues to soar and passed $60,000 CAD for the first time this week. Ethereum continued it’s meteoric rise and is trading above $2,200. Spot volumes continue to climb as a wave of new buyers and sellers onboard on platforms across the world.

Big Story: Tesla Bought $1.5B Worth Of Bitcoin. How Did The Media React? 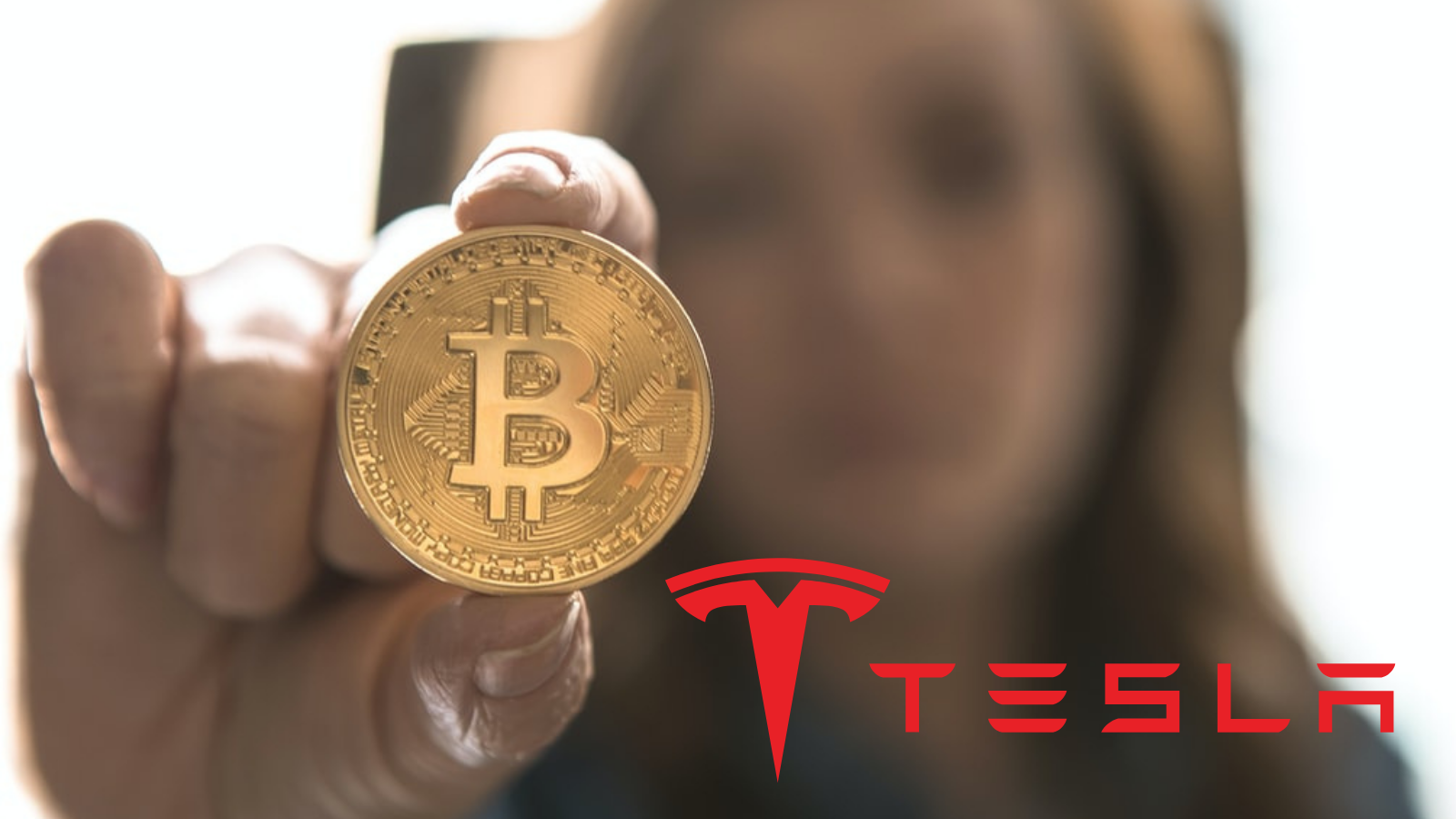 Tesla’s (TSLA) Revelation Earlier This Week That It Has Purchased USD 1.5B Worth Of  Bitcoin And That It Plans To Accept The Coin As Payment Has Pushed Bitcoin To New Record Highs And Invited A Flurry Of Speculation On What The Move Means For The Asset

Tesla’s move into Bitcoin follows a week during which MicroStrategy’s ‘Bitcoin for Corporations’ conference dominated crypto headlines and social media discourse. That event, which sought to pitch BTC as an inflation hedge and provide corporations with resources to gain exposure to the coin, ‘attracted 8,197 attendees from 6,917 different enterprises’ according to MicroStrategy CEO Michael Saylor.

As such, significant attention was being afforded to the notion of BTC as a treasury reserve asset and broader corporate involvement in the asset class. RBC Capital Markets analyst Mitch Steves speculated that Apple could benefit from a move similar to PayPal’s and Tesla’s in a Monday research note. Steves wrote that Apple has a ‘clear opportunity’ to offer buying and selling of crypto and that the firm could consider adding BTC to its balance sheet, ‘which would send even more users to “Apple Exchange.”’

In almost rolling coverage of the move on CNBC pundits discussed regulatory implications of Tesla’s move. For example, pundits discussed the possibility of BTC displacing the US dollar as a global reserve currency. Asked ‘what can they do,’ referring to regulators, a commentator answered ‘they can regulate the hell out of it.’

In another CNBC segment, Jeff Kilburg, the CEO of wealth management firm KKM Financial said hat he is ‘optimistic’ over the prospect of  the SEC approving a BTC ETF in 2021 and that broad mainstream adoption by the likes of Tesla and PayPal has led to the ‘maturity of [BTC] actually being confirmed today.’

Crypto incumbents, such as Galaxy Digital CEO Michael Novogratz argued that ‘[y]ou’re going to see every company in America do the same thing’ in an interview with Bloomberg Television. Financial Times reported that their most read story of the day was Tesla’s BTC investment.

Several hours after the announcement, Miami Mayor Francis Suarez tweeted ‘working on a resolution for our commission for this Thursday’s meeting to get the ball rolling…[Musk’s] announcement was very helpful.’

Takeaway: Media pundits and crypto-native business leaders that joined news programs across the day treated Tesla’s announcement as a historic moment. For BTC’s earliest and most ardent investors, the coin’s ethos is being validated by prominent investors and corporations on a regular basis now.

On a practical front, Michael Saylor argued that ‘[Tesla] has de-risked the acquisition of [BTC] by public companies and accelerated the digital transformation of corporate balance sheets.’ Whatever the practical outcome may be, the variance in comments seen by pundits over the last 24 hours – from questioning the asset’s regulatory status, its competition as a reserve currency with the US dollar, to asking ‘who’s next’ – shows that BTC is still far from securing a firm vision and understanding for what the future holds for the asset. Despite a mainstream embrace, the asset is still extremely nascent and its future use remains the subject of diverse speculation.

Bank of New York Mellon said it plans to custody, transfer and sell BTC and other cryptocurrencies on behalf of its clients. The bank plans to allow cryptocurrencies to eventually pass through the same infrastructure currently being used by its asset-management clients. Crypto would be managed via a platform that is currently under development. – link – @CNBC

In a blog post Mastercard has announced it will begin supporting cryptocurrencies on its network later in the year.  The firm writes that it is ‘preparing right now for the future of crypto and payments, announcing that this year Mastercard will start supporting select cryptocurrencies directly on our network.’  The firm believes the effort will create opportunities for ‘shoppers and merchants, allowing them to transact in an entirely new form of payment.’  Mastercard did not specify which assets it plans to support – link – @CNN

In an interview with CNBC Twitter CFO Ned Segal said the firm has considered putting BTC on its balance sheet and paying employees and vendors with the coin. Payment company Square, which is headed by Twitter CEO Jack Dorsey, acquired USD 50M worth of BTC for its corporate treasury in October. – link – @Reuters

Bank of Canada Deputy Governor Timothy Lane described the recent growth seen by crypto as a ‘speculative mania.’ In a speech on payments innovation (see Crypto Multimedia) Lane also stated that a ‘digital currency is by no means a foregone conclusion’ but that ‘the world has been changing even faster than we expected.’  – link – @Bloomberg

Amazon appears to be preparing a digital currency initiative in Mexico according to several job postings. The job postings describe a product that will ‘enable customers to convert their cash in to digital currency using which customers can enjoy online services including shopping for goods and/or services like Prime Video.’  According to one of the posts the initiative is aimed at emerging markets. – link – @CoinDesk

What’s the difference between investing in cryptocurrency vs. blockchain?

That’s the question we answer in our latest blog post on Bitbuy Resources. We take a look at different ways you can invest in crypto projects, or companies that are utilizing blockchain and crypto tech behind the scenes.

Head to Bitbuy resources to read the full article!