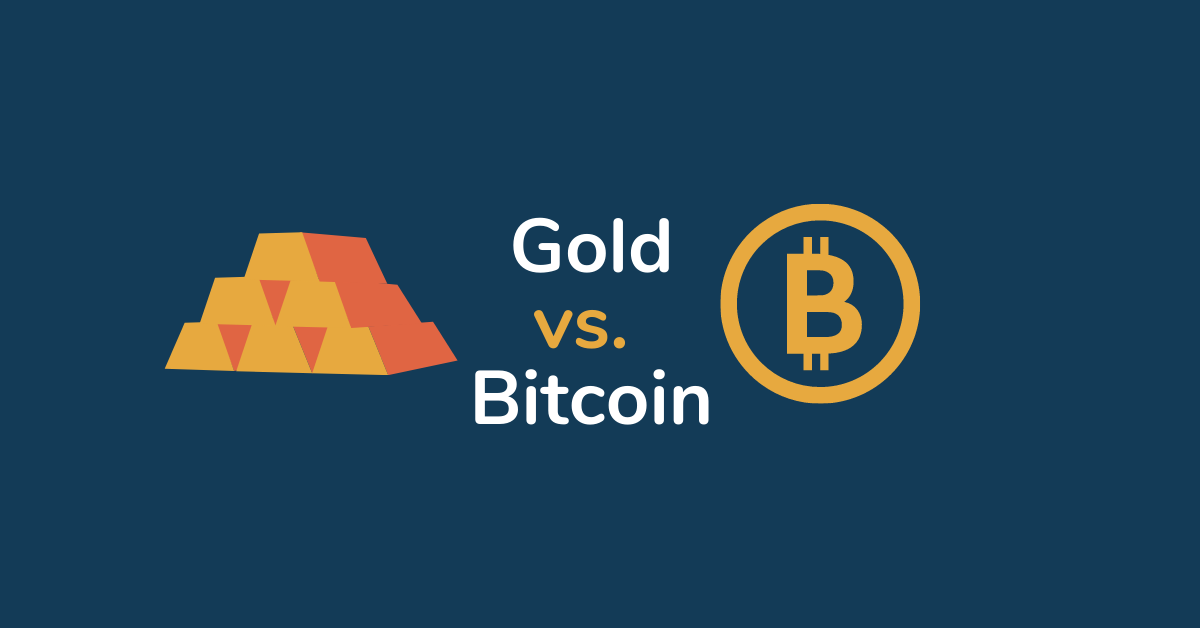 Intro to Gold Vs. Bitcoin

Many comparisons have been made between when it comes to Gold vs. Bitcoin in the last couple of years, as investors have tried to understand how to price-in the future value of digital assets that have little to no track record.

Gold has been around and had value for thousands of years, while Bitcoin only just celebrated it’s 10th birthday. How could the two be similar at all? In this article, we take a look at the many similarities and some of the differences of the two non-traditional assets.

To start, both Bitcoin and Gold are seen as non-inflationary ways to store wealth and alternatives to holding cash. Investors tend to put money into gold during different parts of economic cycles as a safe and secure investment when the stock market is down, or too volatile for their liking. Many economists believe that Bitcoin could take over as the store-of-value asset of choice, once it’s established itself as a regulated and trusted commodity for investors.

Gold vs. Bitcoin vs. The Markets

Gold has certainly stood the test of time, and retained some value through bear markets, bubbles and new technological advances. Bitcoin certainly has a long way to go to legitimize itself as a long-term store of value.  Volatility is another key factor to consider when comparing Gold vs. Bitcoin. The volatility of Bitcoin (see historical prices here, on the Bitbuy bitcoin featured page), clearly shows that the asset has a long way to go in order to establish a standard of holding value.

Another way in which the two assets are similar is that price is solely dependent on supply and demand. Each asset is only worth what another entity is willing to pay for it. Whether it’s one gold bar, or one Bitcoin, there is a generally accepted market price at any given time that investors can reference. Speaking of price, many of bitcoin’s detractors point to the fact that bitcoin isn’t backed by any government. How could a currency have a value is no government will recognize it? Contrary to popular belief, gold is no longer backed by the government either.

The Gold Standard was an economic model used by many nations where the local currency was backed by a federal reserve of physical gold. The Gold Standard was abandoned by most nations in the early 20th century. Specifically in the US, the gold standard ended completely in 1973 when the United States also stopped issuing gold to foreign governments in exchange for American currency notes. Canada ended the gold standard much earlier, in January of 1929, when they decided to stop redeeming Dominion notes in Gold. Since the gold standard was ended, gold has retained its own value independent of government involvement. Does that sound familiar? This is a key feature for many Bitcoin maximalists, who insist that a legitimate currency without any type of government control is a massive milestone, and incredibly important to the future of the world economy.

How Does Gold vs. Bitcoin Stack Up

Both assets can be bought and sold, but there are some key differences between buying and selling Gold vs. Bitcoin. With gold, an investor can easily buy it physical form, from a dealer or, in some cases, from a bank. Investors can also buy Gold options, futures or Gold ETF’s from financial platforms and institutions. Bitcoin is traded on cryptocurrency exchanges such as Bitbuy, or can be bought privately, through an ATM, or an over-the-counter (OTC) trade. Buying Bitcoin and Gold both require research, and are subject to local laws and regulations. For more on how to buy Bitcoin in Canada, refer to this guide.

Although both are valuable and the prices are volatile, they are traded less than normal equities like stocks or bonds. Gold trading activity accounts for about 1-2% of all market participation, and even less can be said for Bitcoin. However, that only accounts for Bitcoin/FIAT trading directly. Crypto to crypto trading is a massive market, with prices fluctuating between currencies there are always market opportunities to shift your holdings between digital currencies. Platforms like Bitbuy Pro are great for crypto to crypto trading.

Another similarity between the two assets is that both Gold and Bitcoin have exclusivity. No, this doesn’t mean only the rich and famous can afford them. It means that there is a limited supply. There is only a finite amount of both Bitcoin and Gold available in the world at any given time. The maximum amount of Bitcoin that can be mined is 21,000,000 while the maximum amount of Gold available is whatever has been mined from the ground which is unknown but relates to the cost of mining. No one can create more gold whenever they want, and no one can create more Bitcoin whenever they want (once the maximum has been reached).

How Much Can Be Mined Gold vs. Bitcoin

A key difference in this point is that is that we know how much Bitcoin can be mined, but it’s tough to project how much gold will be discovered and mined in the future. Mining exploration in Canada and abroad is ongoing, with no sign of a slowdown in a multi-billion dollar industry. Gold demand is constant and has been for hundreds of years, so we can expect a constant increase as long as more unmined gold is discovered.

Bitcoin and gold are also similar in that the actual asset has multiple uses. We often think of the only primary use of gold being jewellery, but it’s also used heavily in electronics, computers, dentistry, aerospace, glassmaking and design. Gold has unique properties that make it incredibly useful for these industries and more. When looking at Bitcoin, there are also multiple uses. While many people buy Bitcoin as an investment and store-of-value, many use it as an actual form of currency for making purchases online, or in the real world. Bitcoin can also be used as a form of remittance, sending money overseas.

When looking at additional similarities of Bitcoin and Gold, it can be said that both assets are traceable to a certain extent. Bitcoin transactions can be followed through the blockchain, where as many gold bars or pieces have serial numbers. Being able to trace Bitcoin transactions can keep transactions safe for users, as wallet addresses associated to criminal activity can stop you from losing your digital currency. Tracing gold is a little different, as it must be in a gold bar or a similar standard form. The standard is for each bar of gold to have a unique serial number, a refiner’s logo, a bar weight and a purity of metal.

How about counterfeiting? We have all heard of Fool’s Gold, which was rampant during the gold rush of the 1800’s. Thousands of people were defrauded into buying counterfeit gold that was almost worthless. Today, counterfeiting gold is extremely difficult, if not impossible. Easy tests can be done in order to ensure the gold you are dealing with is real. If you have some gold and are looking to test its authenticity, you can refer to this YouTube video that has a few simple tests.

Counterfeiting Bitcoin is also almost next to impossible to due cryptographic hashing. A Bitcoin is an entry on a blockchain, which is to say, it’s more like an entry on a ledger as opposed to a computer file that could be duplicated. Although it’s unknown if it’s ever been attempted, many Bitcoin experts agree that a counterfeit block inserted into a blockchain would almost certainly be caught. For more information on why it’s nearly impossible to counterfeit Bitcoin, here is a great video resource produced by Digital Asset University. However, when looking back at the altcoin boom of 2017, perhaps many of those were “Fool’s Bitcoin” – scams that never reached anywhere close to the level of Bitcoin.

Gold vs. Bitcoin – Are They Both Currencies?

When it comes to actually buying and selling things in the real world, is it better to use gold or Bitcoin? Precious metals aren’t often used for transactions, where as digital currencies are increasingly used to buy things in the real world. Many vendors, online and the real world accept Bitcoin, although the slow transaction speed can be a detractor to adoption. The lightning network hopes to solve this, and is rapidly being tested and implemented worldwide. Bitcoin manages the double spending problem by implementing a confirmation system, and maintaining a universal blockchain ledger, which has similarities to the traditional cash system. If you own gold investments or actual gold, you’ll almost certainly need to convert it back to cash in order to make a purchase of any kind.  If you believe in the technology and future of digital currency, you may want to buy bitcoin online and hold the coins for a number of years, and then treat yourself to a purchase in a couple of years.

As you can see, there can certainly be arguments made that Bitcoin and Gold have similar characteristics, and could be complementary assets moving forward. Will Bitcoin replace Gold as the standard store of wealth investment? The honest opinion of this writer is that won’t happen anytime soon, but Bitcoin certainly has enough similar characteristics to one day be held to that standard.

Disclaimer: This article should not be taken as, and is not intended to provide, investment advice. Please conduct your own thorough research before investing in any cryptocurrency.