The Best Bitcoin And Cryptocurrency Apps 2020 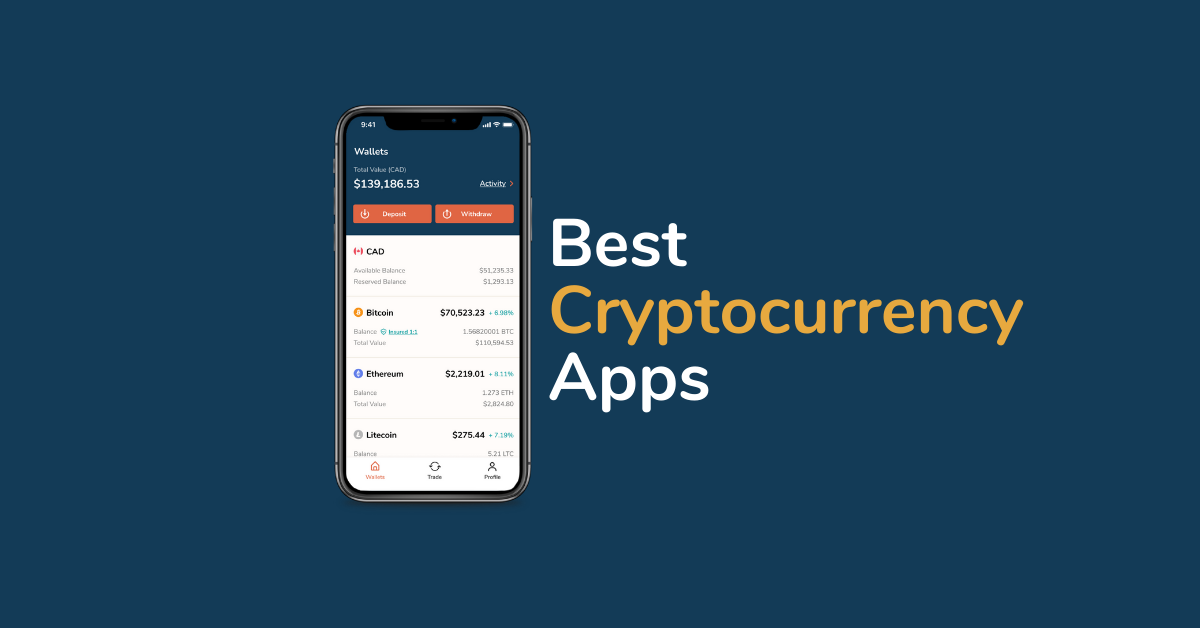 In the latest article on Bitbuy resources, we take a look at all of the top cryptocurrency apps currently available. From covering the most recent news and updates in the industry, to the best trading apps and crypto-based games, we break them all down in our newest guide.

Covering all of the top cryptocurrency apps would yield an article so vast, we’d rewrite Wikipedia. Instead of doing that, we’ll review only the best apps that are the most usable as we head into 2020. We’ll also cover some of the top decentralized apps in the crypto world, not just the ones that are on the Apple or Google Play store. And of course, in celebration of the launch of Bitbuy’s very own app, we’ll give you a quick walkthrough.

The Best Cryptocurrency Apps for Trading and Investing

No matter what anyone says, let’s be honest, very few people get into Bitcoin, cryptocurrency, or blockchain technology because they love the technology and innovation and they want to play a role in revolutionizing the future. Most people are in the industry to make money, even if that money is decentralized and only digital. That’s why the overwhelming majority of the most popular apps in cryptocurrency are all about trading and investing. The very top apps in that particular category have a few things in common:

The top apps in the trading and investing category include:

95% of all the cryptocurrency traded through Bitbuy is in cold storage, meaning those funds can’t be hacked. The newly launched app is available for both iPhone and Android devices. It’s the best option for Canadians who want to deal in Canadian funds and get support from a Canadian company should they have any issues. It allows for buying and selling Bitcoin and other cryptos, funding the wallet with convenient Interac e-transfers and tracking prices in real time anywhere the user goes. All within a built-in secure wallet system. News, guides and technical analysis can all be accessed from the app.

Coinbase is so popular and so easy to use, there’s a good chance anyone you know that’s new to the world of cryptocurrencies is already prepared to open their first account. Coinbase is king of the entry-level crypto customer. Why is that? It allows users to buy digital assets instantly using a credit card or bank account. Customers don’t have to be masters of trading or even fully understand blockchain to get in the game. When the website initially launched, users could only purchase Bitcoin instantly. Today they can buy several other altcoins, including:

Aside from allowing users to buy and sell crypto using the app in an easy-to-use format, Coinbase also offers a trading platform called Coinbase Pro. The platform has a large following in the United States but is not as popular internationally or as a mobile app. The winner of that popularity contest is Binance.

Binance isn’t just winning the popularity contest among trading and investing apps, it’s totally dominating. The reason is not just because of the user experience on the app. It’s because the CEO of the company ChengPeng Zhao is a true visionary. He, along with his technical team, launched the Binance token, which allows traders to save on trading fees just by owning the exchange’s coin. Binance has done a great job of rewarding active traders, on-boarding lots of different altcoins, providing the market with lots of liquidity and making it easy to read both basic and advanced charts in real time. These features give traders on Binance the best opportunity possible to succeed in the long term and get all the information they want at their disposal.

Most fans of Blockfolio aren’t using the app to buy or sell their cryptocurrency, but they are using it to track price movement and the current or past value of their buy and sell orders. Blockfolio offers users the ability to track more than 2,500 different cryptocurrency assets. The cool part about the app is the customization features. Users can enter the exact price they bought and sold at, track specific currency and how well it’s doing against the price of bitcoin or against the U.S. dollar. They can also track their profits or losses based on prices that are found on a specific exchange. This is important since international exchanges buy and sell Bitcoin and other digital assets at different prices depending on how scarce given assets are in their own country.

An argument can be made that RobinHood is not really a crypto app. At least it didn’t start out that way. The platform allows users to trade stocks, mutual funds, options and gold, all commission free. RobinHood Crypto promises to do the same thing with digital assets. It’s growing in popularity because of the commission free aspect with the platform itself isn’t that much different from any number of apps that offer charts, real-time information and basic order types.

There are two different apps strongly recommended for monitoring cryptocurrency news on a day-to-day basis. Even those who have barely gone beyond googling the phrase “What is Bitcoin” might already be aware of these two applications. They come by way of Coindesk.com and CoinMarketCap.com.

As far as storytelling and journalism goes, no single website is more of an authority on the cryptocurrency and blockchain scene than CoinDesk.com. The site regularly features the latest news from key influencers around the industry and it was really the first big time authoritative crypto website to rise the top, many years before the mainstream media perpetuated the potential to get rich off of Bitcoin. Coindesk is owned by a much bigger company and runs two of the largest annual crypto networking events in the world. Any new project worth a grain of salt wants to be featured on Coindesk.com. Its instant credibility and means said project is making some noise.

The chart page offers standard candlesticks indicating whether the price moved up or down. The currency conversion tab is pretty straightforward. Users just pick the appropriate currency, list the value they own and see what its worth in Bitcoin or any other base currency they choose.

CoinMarketCap.com doesn’t do a very good job of promoting news on its website, but even complete crypto rookies know that it is the number one website in the world for checking cryptocurrencies on a moment’s notice. That’s why CMC has a huge advantage when it comes to exposing its brand to newbies. The number one reason people get involved with cryptocurrencies is to make money as we’ve established. And what drives a new trader’s impulses more than the most up-to-date news? Nothing.

Rookie traders make the all too common mistake of trying to react to the fear of missing out. This means they open up the app, see that they’re missing out, read the news to find out why and then buy-in only to lose in the short-term. Surely it makes no difference to the folks at CMC whether or not their users are making money, but the point is to an impulsive group of people hungry to learn, getting the up-to-date news as soon as possible is of utmost importance.

Bitcoin is a decentralized peer-to-peer payment network. Most people reading this probably already know that. But from a broader perspective, it’s really just an application. After all, the underlying blockchain technology that supports Bitcoin doesn’t just have to be used for financial transactions. A decentralized database (which is what a blockchain is) can be used to handle all sorts of information that people may want to keep secure and personal.

StateOfTheDapps.com is a great resource for finding out which decentralized applications are being used the most. It also gives users a snapshot of new decentralized applications that are in the works. All of the projects featured on the website are organized into different categories based on their use case. Naturally each project possesses its own unique characteristics, so going onto the website to get a surface level overview of what’s out there is a good start, but it’s not a replacement for drilling down and learning more about projects by visiting their individual websites.

Nevertheless it’s easy to separate the contenders from the pretenders, because visitors can see exactly which decentralized applications are being used the most. StateOfTheDapps.com is an essential vetting tool for anybody that’s interested in investing in projects on the Ethereum network. There are a lot of them to choose from.

That said the website also tracks projects that are on 10 other different blockchains, including:

The top decentralized application currently boasting the most active users is a project called COSMOCHAIN. It’s a marketplace project for the beauty industry built on the Klatyn blockchain.

The second most popular project right now is a collectible trading card game built on the STEEM blockchain called Splinterlands.

Rounding out the top three is a security focused project began built on Klatyn called Cloudbric. Cloudbric promises to help individuals and businesses improve their level of mobile and online security. The project specifically deals with crypto assets and exchanges.

We’ve already touched on COSMOCHAIN. Using blockchains and cryptos to run a marketplace is probably the clearest use case for the technology. After all a marketplace is really just a group of people that are exchanging value, with buyers and one end of the transaction and sellers on the other. Call a blockchain it a peer-to-peer network or marketplace. It’s really the same thing. Basic economic constructs reimagined on a decentralized network.

Gaming has a double meaning when it comes to blockchain. We’re talking about both gambling and trading games here. CryptoKitties started it all and today, major online gambling sites that started out doing business in the fiat world are now accepting cryptocurrency. The blockchain is also being used to provide provably fair and transparent gaming to users on a level that traditional casinos have never provided before.

STEEM is the best example when it comes to social networks done right on the blockchain. Traditional social networks like Facebook make money off of user generated content and the data that those users provide to the platform. STEEM and other blockchain competitors let users profit off of the content they generate and allow them to dictate who gets to have access to their data, if anyone.

Golem is a project that lives on the Ethereum blockchain, yet both are committed to helping developers create distributed and decentralized computing systems. There are many of these types of projects. But technological development isn’t just about creating supportive environments for programmers. The storage sub-niche is also a huge within that. Storj and Siocoin aim to give users access to cloud-based storage that’s completely private on a scale comparable to that of companies like Amazon. There are also many other projects dedicated to improving technology for all users and democratizing it.

A simple search on the Apple Store or Google Play store using the word cryptocurrency or Bitcoin will show anyone the most popular apps currently dominating the blockchain world. Anybody who wants to dig deeper than that and get more into the technology can go to StateOfTheDapps.com.

That said if you’re one of those people that wants quick access to cryptocurrency from a smartphone in Canada, Bitbuy is the one to try. It just recently launched and gives users access to all of the top cryptos in the industry.

Now that you know about all of the top cryptocurrency apps, start downloading them and become a bigger part of the blockchain revolution.